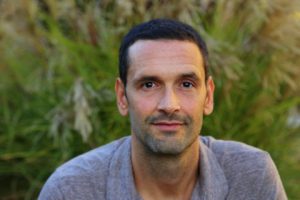 From a young age, Adi (born Paul Marino) felt that Love was more important than anything else. Unknowingly, this subtle knowing led him to seek to understand God. As a teenager, Adi developed a fascination with shamanism and ‘expanding consciousness’. Years later, in 2003, Adi had an awakening to the essential nature of Self which profoundly transformed everything that he had thought was real. After working intensely with a Navajo medicine man and studying the mystical traditions of the world, Adi left for India in search of a fully enlightened Master. After a rigorous search he stumbled upon Sri Ramana Maharshi, where the search ended. Ramana’s invitation was to discover the Self, which is always one’s natural state of being. He gave us the beautiful gift of self-inquiry in order to find out “Who Am I, Really”. Later meeting and working with awakened Masters, including Gangaji, Adyashanti, and Elle Collier Re, Adi began teaching and pointing others to the living Truth that is one’s own nature. Adi brings a simple and direct style that doesn’t waste time with non-essentials. He draws on the wisdom traditions of Christianity, Advaita Vedanta, Zen, Tantric Buddhism, and Yoga in his teachings. The challenge here is to dive deep into yourself in order to find out what’s really, really True. These teachings are meant for those who are no longer interested in attaining anything special, but who are interested in the truth that is available always in the yearning of the Heart.